If there were any bats in the belfry, Cranberry Flick sent them packing, with two hours of top entertainment, raising a fair sum of money for Beeston Methodist Church as well. A very appreciative audience sang along to Minnie the Moocher and was lulled by the sweet tones of Angie singing Don’t know Why. Our version of the chuckle brothers made a show of bringing Angie’s stool out (we didn’t find out until later, that one had passed away!) and the infamous two cocks made an appearance over the pews!!! Confused? Well come to our next show, soon to be announced. Talking of bats. Two bats sat in cave, one with blood round his mouth. One said ,’ where did you get that ‘ the other said ‘ See that tree over there?’ Yes replied the other.
‘Well I didn’t’ 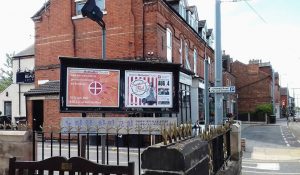